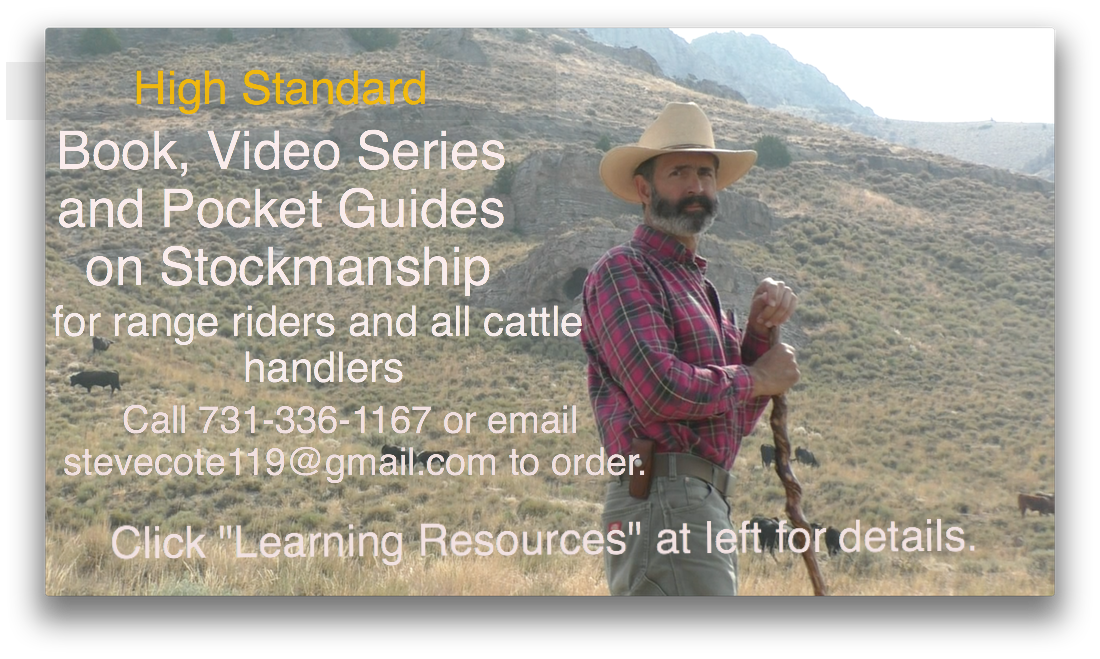 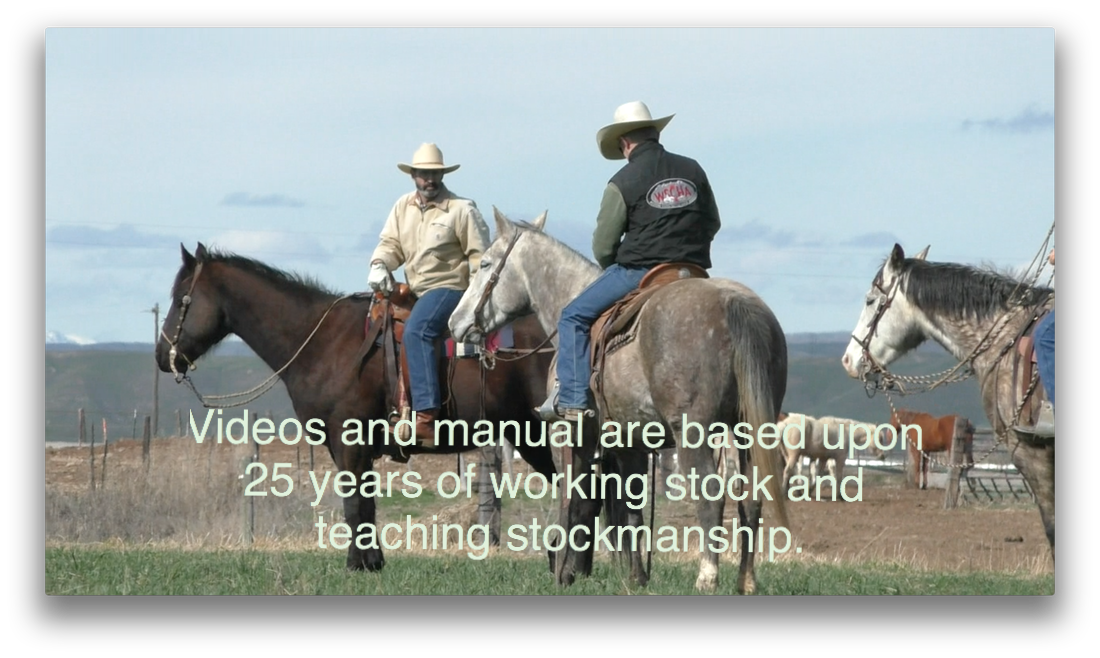 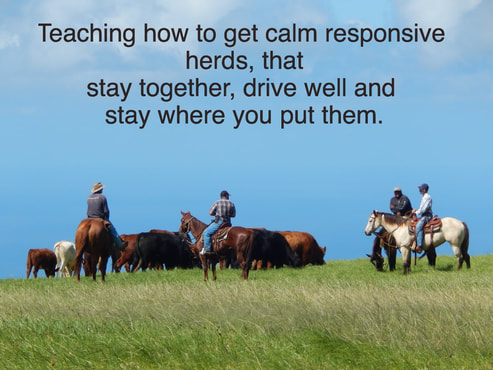 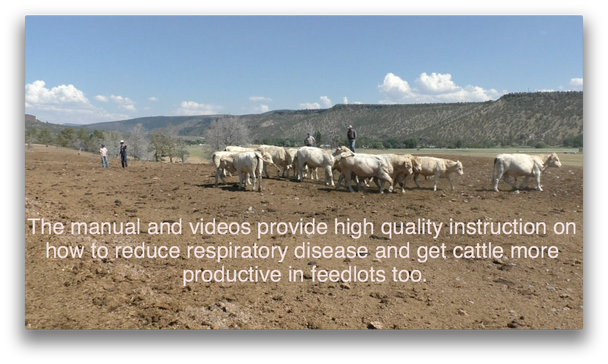 Stockmanship School-Instructor Steve Cote-teaching a young man to start bulls going a desired direction by going back and forth in straight lines perpendicular to that direction.
These bulls would run across the pen a half hour ago, now they are under the control of a boy and becoming calm and responsive.

The Stockmanship Method we teach is probably more powerful than the advent of modern veterinary medicine.  You can drastically reduce your sickness rate-just by handling your livestock better. Traditional handling stresses animals so they are more susceptible to sickness.
If you want to control respiratory and other diseases,  the most powerful tool is good handling, not vaccines.
Defining Stockmanship

Stockmanship is basically:
1)Setting it up, or arranging our movement and actions so that cattle will want to do what we want calmly, then getting out of their way of doing it (which is allowing them to get the paycheck for doing it-which is release of pressure and not inadvertently inviting the wrong thing).  We are letting them get away but controlling their way of doing it-which is basically how you train a horse.  Also don't invite the opportunity for them to take the wrong way or they will take it most times.

Stockmanship is comprised of a set of principles (like with horses), techniques, understanding of cattle traits and some guidelines, tips and things not to do.  If you follow the horsemanship principles, you can solve cattle handling issues.  Use all these components consistently and you will create calm, responsive, healthy and productive animals. Most herds need to be worked to have trust built, as traditional handling creates distrust or fear, then the techniques work consistently if you apply them in accord with the principles etc.    You don't need great skill but do stockmanship, but you need the will to do it consistently.
This manner of handling  produces calm, responsive stock that will load into trailers willingly, stay where you place them, drive well, be calm about weaning,  will stay together, go past people calmly, through gates, turn easily, go up the chute calmly etc.  Stock handled in this manner respond calmly to everything the handler does.  Stock aren’t aggressive towards people, are good mothers, free of stress induced sickness (like BRD) and footroot, are relatively unconcerned about noises, thunder, traffic and other pressures.  When stock learn to take our pressure, they can take many other pressures well, they aren't stressors anymore. 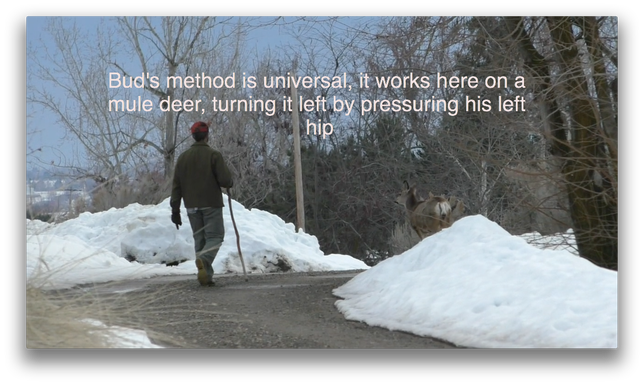 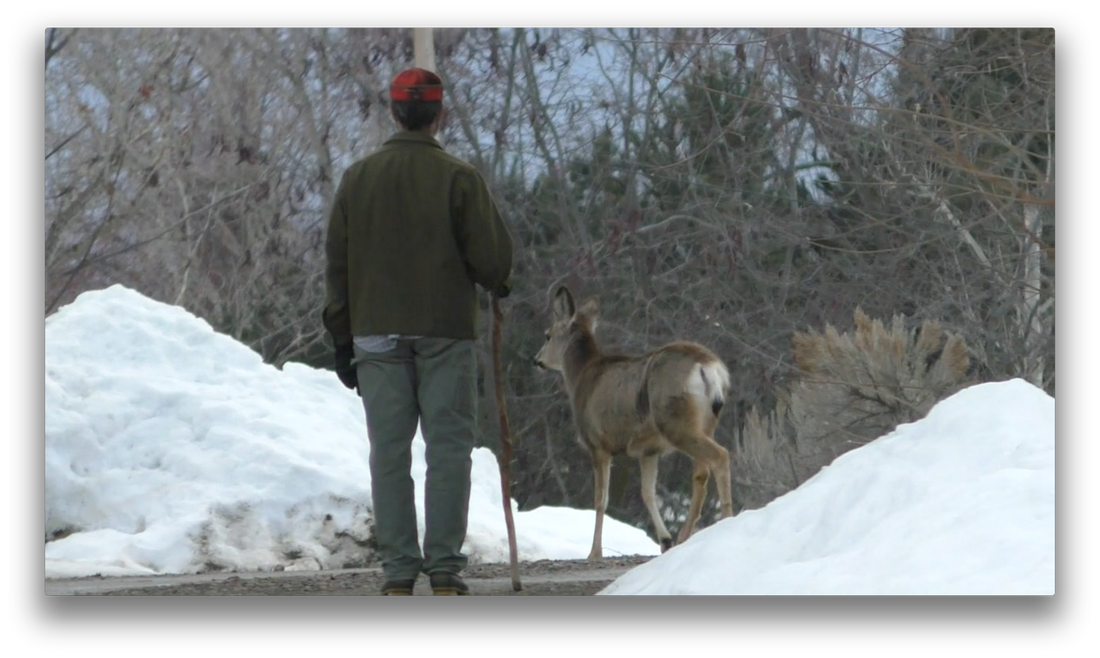 You can turn the lead cow a long ways away by pressuring their hip.  Very handy to be able to do when driving stock down a lane and you want them to turn down one path or another. 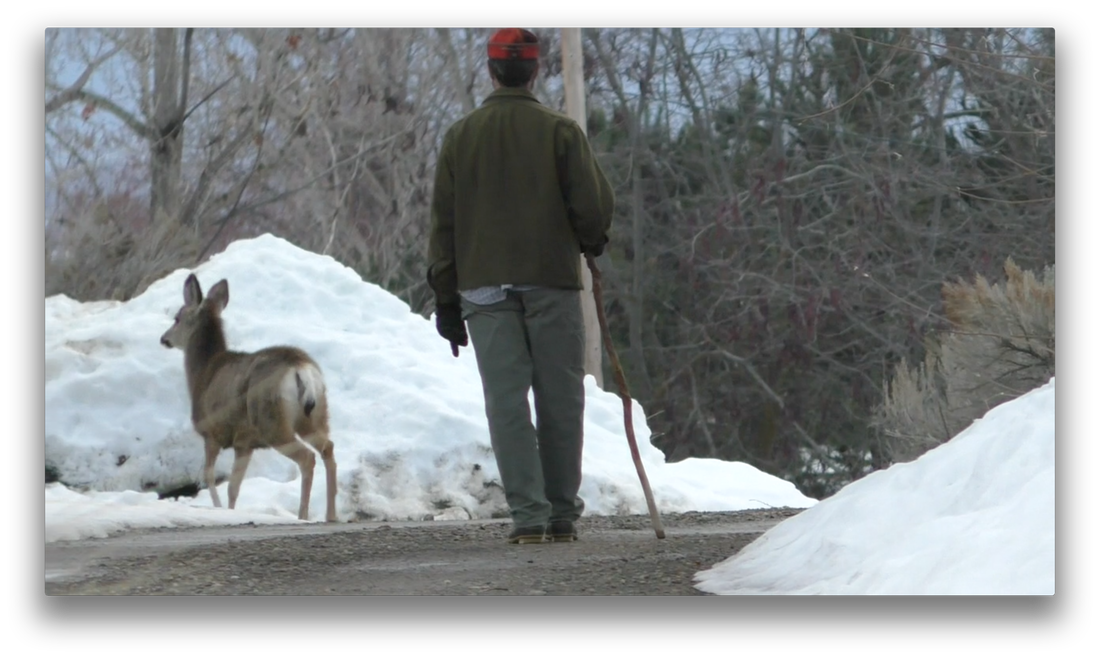 This deer turned left even though its buddies were down and to the right-mule deer want to see whats pressuring them just like cattle.
Stockmanship is a powerful tool for Grazing Lands Management 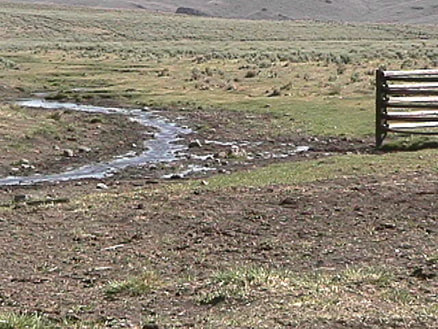 Before Planned Grazing and Herding
PLACING HERDS
One of the most powerful tools for grazing lands management is when cattle stay as a herd (where you find one you find them all) and that a herd will stay where you place them. So, a herd will stay in uplands, leave to drink then return.  Herds can be moved on when desired, so that overgrazing and over resting can be controlled, enhancing uplands and riparian areas. 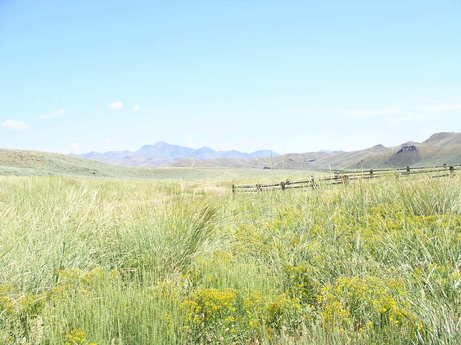 After planned grazing and herding-Steve Cote
﻿This is the kind of change possible after 2 years of planned grazing (Holistic Planned Grazing with Alan Savory) and herding with stockmanship where I trained the rider to rekindle the herd instinct and place the herd in the uplands.  This handling eliminates bunch quitters and riparian loafers and you can see the riparian improvement.﻿ 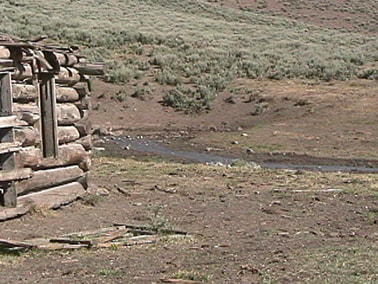 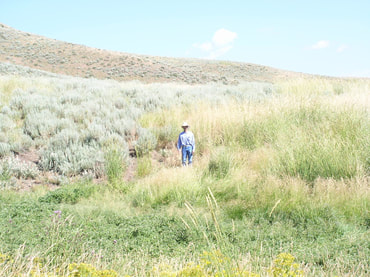 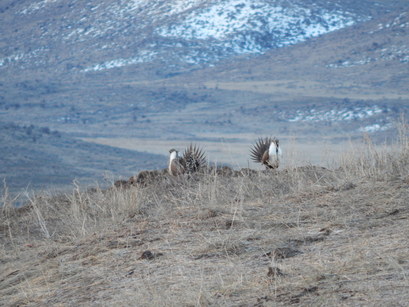 If the herd is under control of the riders then you can go around sage grouse leks or nesting areas, and other critical spots like poison patches, elk calving places or campgrounds etc.
​Some of the values of Bud Williams Stockmanship to Grazing Associations or ranches grazing public lands
Benefits realized by ranchers and association riders.

1)  A grazing association can control implementation of the grazing plan because the herd is under control.
​ 2) Riparian standards can be met with less riding.
3) Losses from wolves and poison plants is reduced or eliminated.
4) Conception rates will increase.
5)Numbers of bulls were reduced.
6) Placing cattle, eliminating bunch quitters and riparian loafers, reduces or eliminates the need for consultants for monitoring-riders could easily do routine monitoring-as they will be meeting in season riparian use triggers.
7)Reduced losses from fires and livestock killed by smoke because stock location is known and where you find one you find them all-highly variable losses.  Also, reduced or zero losses on high snow years like last year and bunch quitters starved-highly variable but does occur.

9) Reduction in pink eye and dust pneumonia.
SUMMARY
Average savings with 2 well-trained in stockmanship contract riders that cost about $29,000 per grazing season, there is a benefit to cost ratio of better than 6:1. 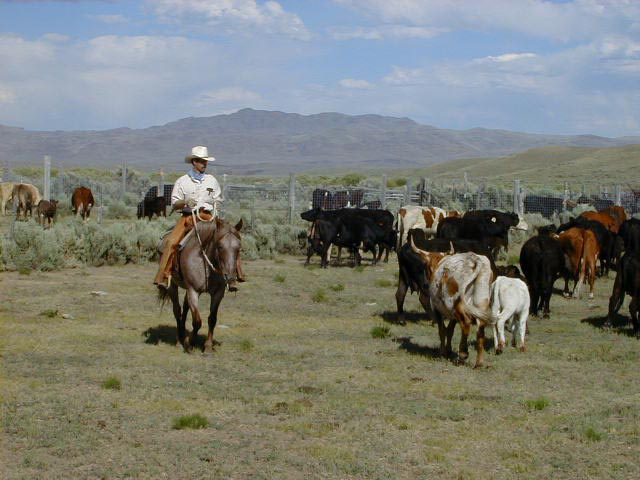 Ride straight by and cattle will move ahead straight. Using the right techniques helps animals do what you want. 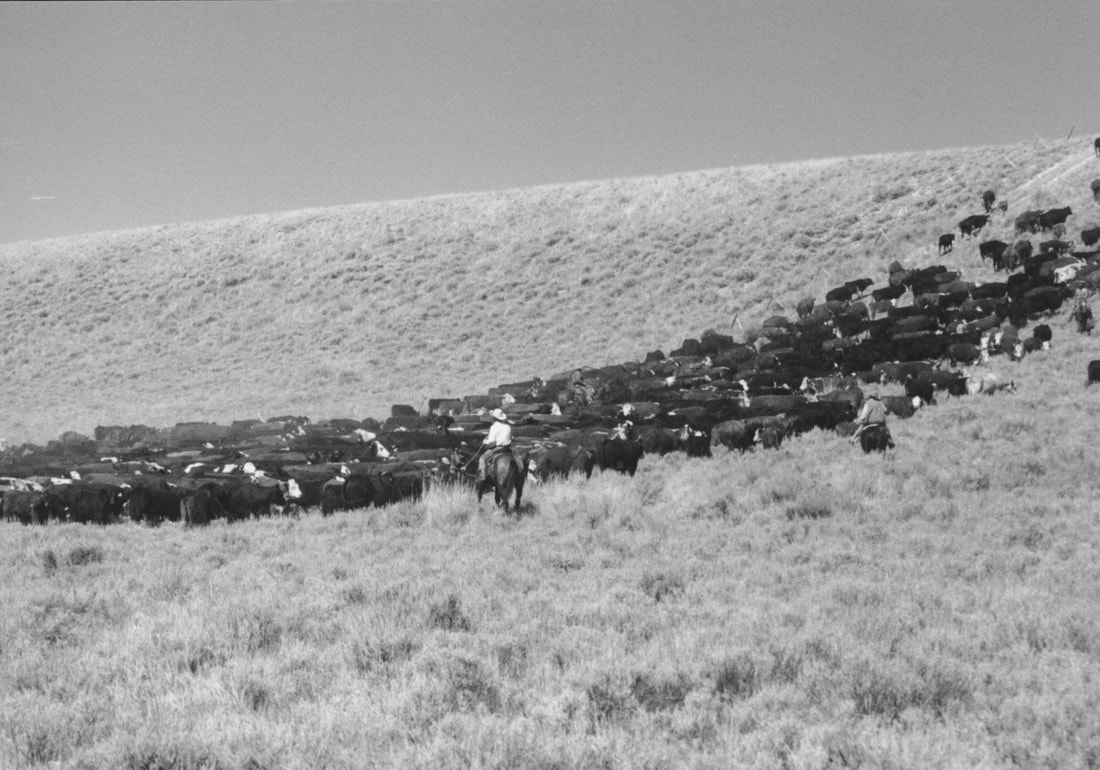 On a major move for a grazing association, stock had to turn sharply through a gate, then go up a steep hill, and it was a problem every year requiring many people and hours.  These stock had been well handled by low stress riders this summer so we did it easily with myself and two trained riders by using some Bud Williams techniques..... 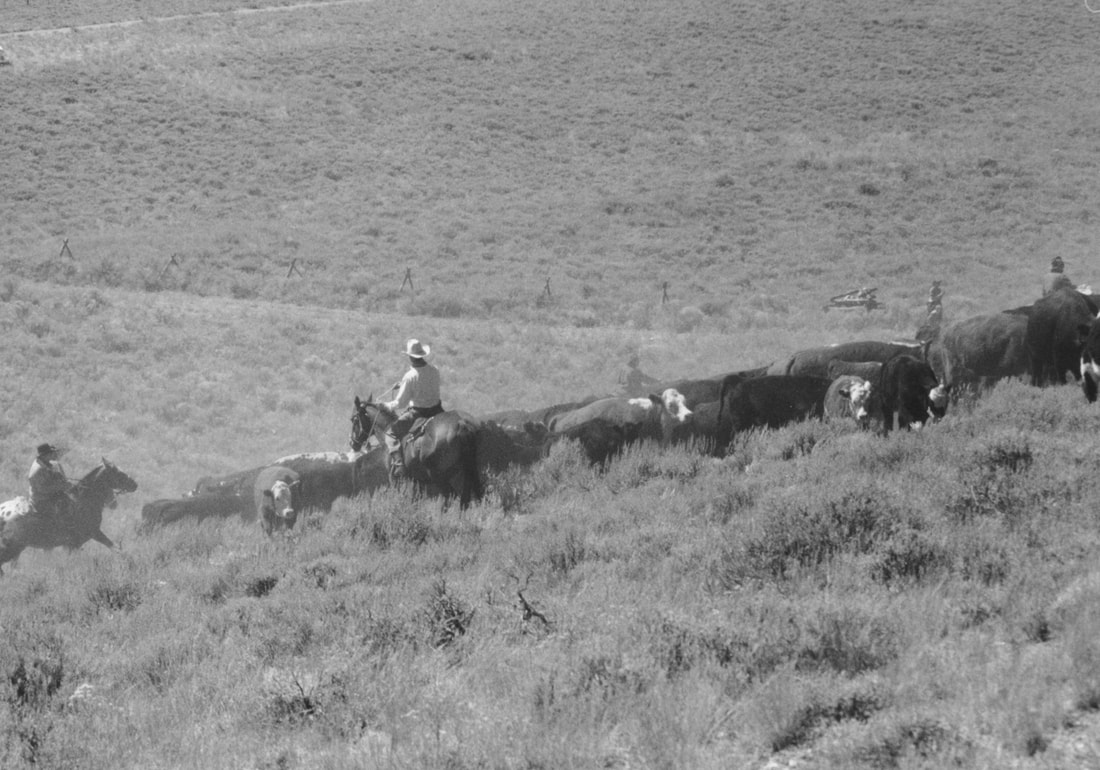 ..which here I am riding down the sides, which is a very effective way of getting stock up steep hills, riders in the back can now pressure cattle more effectively because the lead is moving up, before they would just shove the cattle in the rear into the cattle ahead so they would sidehill or break back.   Some moves up steeper hills now take 45 minutes instead of 4 hours and the stock aren't stressed, just a little tired. 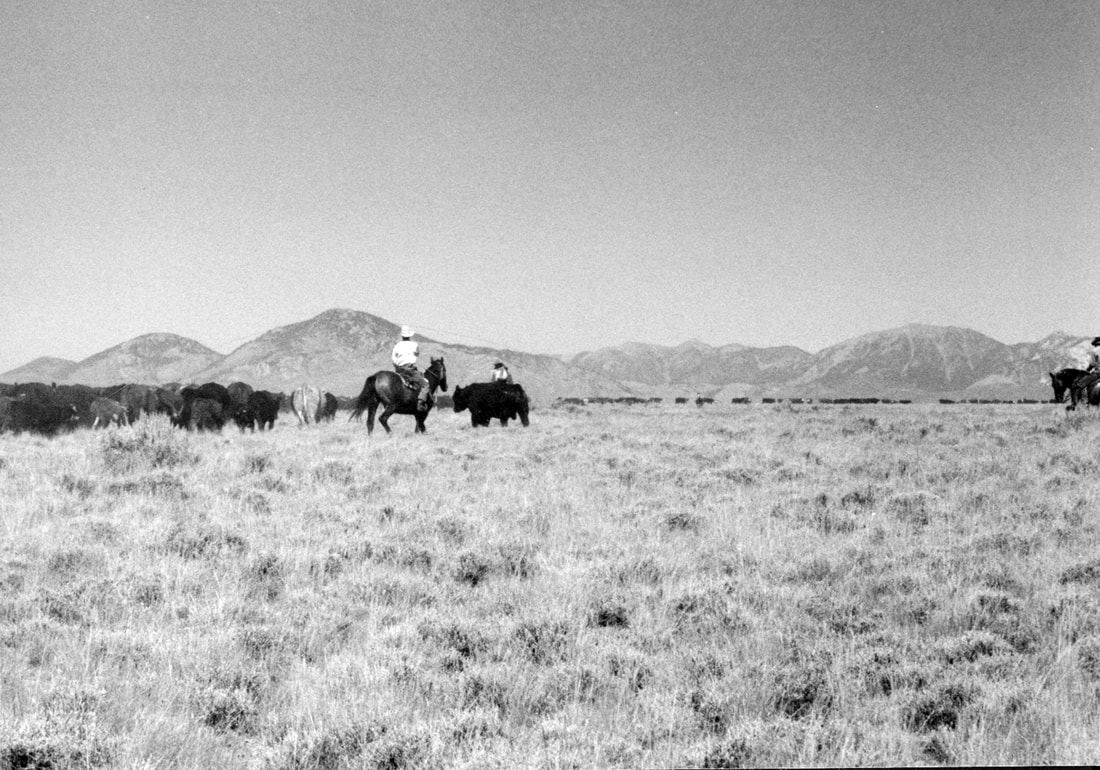 Now we are over the top of the hill and 1,300 pairs and yearlings are trailing nicely to the next grazing unit.  Three or four riders did in a quarter of the time what used to take 14 because the cattle were well handled first and riders then set it up so they wanted to go where we wanted.